Our website uses cookies to place bookings and help us provide a better service. Continue to use the site as normal if you're happy with this, or click here to change your settings
0800 9888 814 - We’re here to help    Hours: Mon-Fri 8:30am to 5:00pm, Sat 8:30am to 4:00pm
Home Wheel Alignment Wheel Alignment FAQ

Wheel alignment is available at all Tyre City centres. We’ve compiled a list of the most common questions we’re asked about wheel alignment to help you understand the process a little better.

What is wheel alignment?

Wheel alignment is the process of measuring and adjusting the steering and suspension components on your car to within the vehicle manufacturer’s specifications in order to improve comfort, performance, handling and safety. Essentially, wheel alignment involves adjusting the position of the wheels in relation one another and the road to increase the life of your tyres and your suspension.

Why does my vehicle need an alignment check?

Regular wheel alignment checks are an essential part of your car’s regular maintenance programme as it can help to keep long term running costs down but also ensures the vehicle is safe to drive. Every day driving affects wheel alignment and over time, your wheels can naturally become misaligned which can lead to the rapid ageing of your tyres. However, premature misalignment is common and can be caused by the following:

At Tyre City our experts can rectify any wheel alignment problems using state of the art laser guided Hunter wheel alignment equipment to accurately align your wheels every time.

What are the benefits of wheel alignment?

There are plenty of benefits of having correct wheel alignment that make having regular alignment checks an obvious choice:

How do I know if my wheel alignment is out?

Misalignment problems are not always that obvious but there are clear signs of an issue that you can look out for:

What's the difference between tracking and four wheel alignment?

If only the front wheels are aligned this is known as tracking. It is also sometimes referred to as two wheel alignment or ‘toe and go’). Tracking is uncommon nowadays as it does not take into account the position of the back wheels which is recommended in order to achieve the best levels of comfort, performance and safety. If you have the front wheels adjusted and set straight, but the rears are out of alignment and not checked, the car may still pull to one side and tyres could still wear prematurely.

Today, four wheel alignment is the norm and is a much more comprehensive geometry check. Four wheel alignment measures a minimum of 12 angles and compares them to the alignment data specified by the vehicle manufacturer. Wheel rim run-out compensation is taken into account, which gives accurate and repeatable readings. With such accurate readings, Four wheel alignment allows toe adjustments of individual wheels which ensure the steering wheel is set straight. Further adjustments of camber, caster and other angles (where necessary) can ensure optimum performance and extend the life of tyres and steering components.

How frequently should the alignment be checked?

We recommend that you have your vehicles wheel alignment checked:

What does wheel alignment terminology mean?

Wheel alignment is quite technical and requires a high level of expertise. To help you understand exactly what your technician is referring to, we’ve provided an explanation of the common terms used and items that are covered during a wheel alignment check at Tyre City. 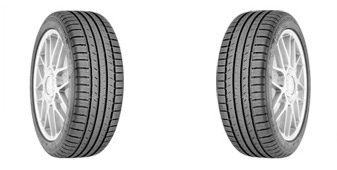 Toe is the angle of the wheels in relation to the vehicles centre line (an imaginary line straight down the centre of the vehicle, when viewed from above). Imagine the pair of wheels (front or back wheels) as a pair of feet. When you turn your toes inwards and your heals out, this is known as ‘Toe-in’. When you turn your toes out and heels in, this is called ‘Toe-out’. 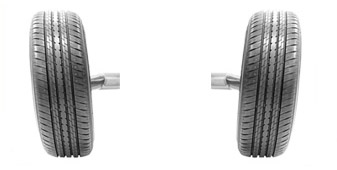 Cross camber is the difference in camber from one side to the other, if each wheel is itself correctly in tolerance, but at opposite ends of the scale, then the cross camber will be high, resulting in vehicle pull which may need attention. Cross camber is often overlooked and some manufactures now specify this value. The car will tend, as a general rule, to pull to the side with the least negative or most positive camber.

The easiest way to understand Caster is to look at a bike (viewed sideways on). If you draw a line down from the centre point on the handlebars down the forks to the ground (on a car this would be the suspension strut), this indicates the ‘pivot point’. Then draw a second line vertical through the centre of the wheel and where this touches the ground shows the ‘tyre contact point’.

The top angle that has been created is what is known as the Caster Angle. If this top angle is reduced then stability is less, therefore it is important to get the Caster set to its optimum angle for the best possible control.

The Centre Line is an imaginary line running down the centre of the car, from the front to the rear and equidistant from the sides. Thrust angle is the direction the rear wheels are pointing in relation to the centre line. If the thrust angle is not zero the vehicle will ‘crab’ – move sideways from the back.

Is wheel alignment the same as wheel balancing?

No, although they sound similar and can be easily confused, wheel alignment and wheel balancing are two very different practices. While wheel alignment addresses geometry and the position of the wheels in relation to one another and the road surface, balancing ensures that weight is distributed evenly around the wheel so that the tyre rotates smoothly to provide optimum road comfort. Both services are available at your local Tyre City centre and wheel balancing is included in the price of every tyre we change.

Where should I go for an alignment check?

Not only do we boast the best alignment centres around, you will also receive a before and after printed report. Your print out will provide details all of your car's alignment values and our helpful staff will go through this with you to explain any wheel alignment issues and how these can be rectified.

We always try to ensure we only show the correct tyres for your vehicle. However discrepancies can occur so please check the tyre size printed on your tyre side wall before proceeding with your tyre purchase. By selecting a tyre size and clicking ‘Continue’, you agree you have checked your tyre size.

We have found the following tyre sizes to fit your

To continue with your booking, please select your appointment time from the list below.